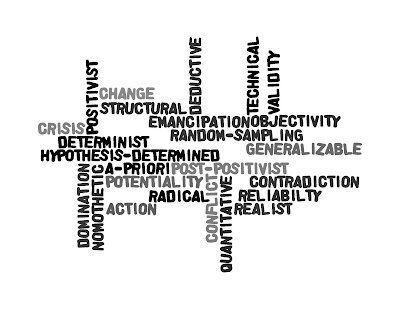 Structure that is radical?
A social work researcher from a radical structuralist paradigmatic perspective would concentrate on the structures of oppression and the aim of knowledge would be for praxis. The researcher would view the social world as comprised of structures which are fundamentally in opposition to one another. Thus, the focus in this research would be to identify ways in which the opposition can lead to conflict, which would eventually lead to political or economic crisis, at which point the present structure would be overthrown. The resultant new structure that replaces the old structure would have solved the problems that the previous structure held. A social worker in this paradigmatic perspective considers phenomenon in the social world objectively as an outside observer, thus the researcher can “know one” without “being one” however these two aspects of reality are irrelevant given that the structure of society determines the limits and bounds of how one comes to know oneself (and is often an oppressive way of knowing oneself). Michel Foucault is a philosopher whose perspective can be used as an exemplar to this paradigm. He considered knowledge to be the result of “winning” over other forms of knowledge for political reasons; thus, whatever form of knowledge won became “truth”. Central to Foucault’s perspective is the knowledge of power and how it interacts within society to create knowledge and subsequently truth. Foucault uses genealogical and archeological methods to uncover the historical discourses of knowledge, power, and truth. One can then use the result of this knowledge to inform how one should approach the overthrow of the present oppressive structure of society.

Social Work Research Process and Product
A research question that might be formulated from this paradigmatic perspective is “How is the power inherent in the majority privilege of heterosexism upheld in faith communities that are non-affirming towards LGB people?” This question assumes that power is the substructure that is dominating and oppressing, which is a Radical Weberian approach. The research could be conducted by holding focus groups in churches and asking questions regarding what the present church finds to be acceptable intimate relationships and how the church came to that understanding. The focus groups would be recorded and transcribed, and then a meta-analysis would be conducted to identify the themes of each focus group. The themes would then be compared to the hypothesis that non-affirming churches are upholding the power that heterosexism gives to heterosexuals. Of course several researchers would be included in this process to ensure that the themes were captured accurately. Then, the research would be presented to the members of the church and changes would be recommended. Perhaps some members would readily embrace the social justice aspect of how heterosexism is injust to those on the margins, and they would call for a change in the church’s mode of operation. The new mode of operation may be distinctly different than the church’s larger denomination, at which point the church members may come to a crisis of either conforming to the denominational standards or breaking free of those standards and creating their own standards. If the church members decide to create their own new standards and break from the denomination, then the product of this radical structuralist research would have been successful. Perhaps other churches throughout the region or country hear the news of this radical church breaking free from the constraints of the denominational standards, and a new wave begins of churches rising up against the denomination to assert their own standards.

An example of a product of research from this perspective is an organization called Soulforce. Watch this brief video compilation that describes who Soulforce is and what they aim to do:

Cost and Benefit Analysis
A benefit to this paradigmatic perspective is that it gives voice to the oppressed people in society, and the research can (in theory) result in liberation from oppressive structures in society. This perspective, therefore, is very oriented towards social justice on a societal level because it seeks to right the wrongs of the present structure. A problem with this paradigmatic perspective is that it depends on crisis in order to succeed. And if the paradigm views the social world as ordered, then it would be very difficult to bring chaos to an ordered world. Most structures are imbedded in the places that they are at because they have fought against crisis and change and have succeeded in remaining true to their structure of origin. Thus, it is the job of the radical structuralist to convince enough groups of people that the crisis and consequent structural overthrow is worthy of the extreme effort it would take to dissemble such a structure. Furthermore, there is no guarantee that the new structure is any less oppressive than the old structure. In fact, some radical structuralists acknowledge that the new structure will, by the nature of any structure, have oppression and domination inherent in it. However, radical structuralism gives a pathway for how to go about overthrowing the oppressive structure as it is in the present reality.
Posted by Megan Gandy-Guedes at 2:33 PM