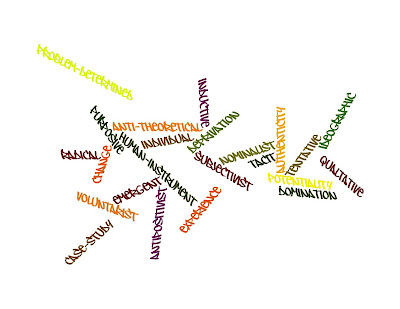 Radically Human?
The radical humanist paradigm is similar to the interpretivist paradigm in that it views the social world as approachable only through the subjective experience of the individual, and that an outside observer cannot attain knowledge of an individual but instead must ask the individual to impart that knowledge to the researcher.  The radical humanist paradigmatic perspective differs from the interpretivist paradigm in that the commitment in terms of knowledge is for overthrowing or transcending the existing social order. This is achieved through consciousness. Radical humanists view the answer to all social problems to be that humans have been alienated from their true selves, and in order to attain fulfillment they must become liberated from that alienation through consciousness of the separation. Radical humanists view the human essence as being an internal property that is unique to each individual, and therefore you must “be one” to “know one” but you must also be radically conscious in order to know yourself! They also view the social world as imposing on the essence of the human by way of domination and deprivation. Therefore, in order to achieve wholeness, humans must find a way to get back to their essence without the constraints of the external social world. The radical humanist perspective is anti-theoretical, anti-organizational, and anti-prescriptive because each of those things only contribute to the alienation of humanity’s oppression. A philosophical exemplar for this perspective is Jean-Francois Lyotard who is often associated with the intellectual and cultural movement called postmodernism. Postmodernism is understood in the context of its predecessor, modernism. Modernism describes the time period during which science and knowledge focused on the totality of the world, included systems as opposed to individuals as the unit of analysis, and used grand theories to explain the social world. Therefore postmodernism can be understood as a critique to modernism. It focuses on the fragmentation of the world, language is the unit of analysis, and favors small-scale local narratives to explain the social world. The two can often be understood as objective reality (modernism) and subjective reality (postmodernism). Thus, this paradigmatic perspective is the extreme opposite of the functionalist perspective.

Take a look at this prezi to help you raise your awareness about radical humanism....


Radical Humanist Paradigm on Prezi
Social Work Research Proposal and Product
A social work researcher in this paradigm might have a single-system design for the study. The researcher would first go about purposefully selecting a sample consisting of an individual who has been oppressed by a faith community. Then the researcher and respondent would engage in casual but meaningful conversation about the individual’s experience as an LGB person in a faith context.  Through this process as the respondent informs the researcher about their own experience, consciousness is raised for each of them in terms of what sort of radical change might help each one achieve wholeness. Thus, the product of the research is that both the researcher and the respondent have experienced consciousness raising about LGB people of faith, and they can then use that raised conscious to go about decreasing the source of alienation that keeps their external world separate from their true essence (internal world). The product of this research would not be published in a peer-reviewed journal article. It perhaps would be made public through an autobiography or even a blog so that others might experience consciousness raising as a result of reading it. An example of a product from the radical humanist perspective is the Queer Theology Syncroblog, coordinated through the AnarchistReverend.com. Watch this short video I compiled from content in the syncroblog:

Cost and Benefit Analysis
A benefit of this paradigmatic perspective is that the experience is very meaningful for the individual. Thus, in terms of social justice, the awareness of how to change is both produced by and given to the individual. Through dialogue, humanity can become conscious but there is not a need to come to “TRUTH” because it is an irrelevant term (in the universal sense). A problem with this perspective, however, is that the negotiation of what reality is could be a never-ending project and thus you may never know what is real. Thus the process might only entail uncovering the issues without ever getting to a solution. The researcher and respondent’s consciousness is raised, but do they ever get around to enacting the change that they are aware of that needs to take place in order to be liberated from the alienation of their souls? However, one could argue that WITHOUT such consciousness, meaningful change is never possible because the essence of fulfillment cannot be achieved without it.
Posted by Megan Gandy-Guedes at 12:49 PM