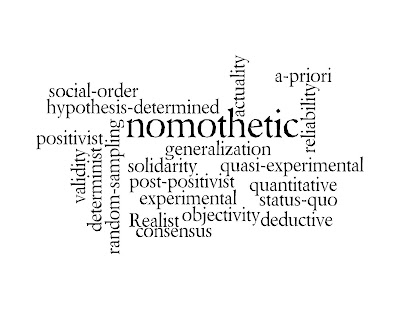 Functiona-wha?
Don't panic. Functionalism is not a word most people hear very often. It is a term used by sociologists to describe a certain philosophical approach to doing research. I am using it in the context of how Burrell & Morgan (1979) used it to explain four different approaches to social science. Social work research from a functionalist paradigmatic perspective focuses on objective truth, seeking to produce knowledge for the purpose of regulation of the social world, and keeping with the status quo. This perspective assumes that there is a certain order to the world, and that it can be known from an observer’s point of view. Researchers in this paradigm are concerned with falsifying hypotheses through the traditional scientific method. The concern of the end product of the research is that it is generalizable to the entire population of concern. Research studies are designed with concern for reliability and validity. This paradigmatic perspective assumes that you don’t have to “be one” to “know one”. A social science philosopher who stands as an exemplar of this paradigm is Talcott Parsons. He viewed society as a unified system with players all serving a purpose. His emphasis was on the action of systems (structures) more so than the actors. Parsons’ ontology was that reality is not a construction of one’s mind; it exists externally to what the mind makes it up to be. Parsons was interested in studying the process that ensures social stability and order. Order, in his view, is possible through the existence of common norms that serve to regulate society.
Take a quick preview of this paradigm by viewing a prezi on its definition:

The Functionalist Paradigm on Prezi

Social Work Research Process and Product
A research question that could be answered in the assumptions of this paradigm is “Is there a difference between membership in an affirming faith community and psychological well-being for LGB people?” A research study conducted from this paradigmatic perspective would entail gathering a large enough sample size to claim generalizability. This could be done through convenience sampling in various settings such as Pride festivals, Gay and Lesbian Community Centers, churches that are welcoming and affirming to LGBT people such as the Metropolitan Community Church (and others), and snowball sampling via e-mail listserves for LGBT organizations and advertising through Facebook and Twitter groups that pertain to LGBT people. The study would consist of an online survey which would result in interval/ratio level data that can be analyzed with inferential statistical methods. A statistical method appropriate to this design is a t-test which tests for whether there is a significant difference between groups based on a mean score. The product of this research would be to contribute to the knowledge base of social work scholarship about LGB people of faith. Another product could be to construct a measurement instrument and test its psychometric properties as part of the data analysis.

One possible product of research conducted in this paradigmatic perspective might be what The Marin Foundation is doing. Check out a short video that I compiled based on content from their website:


A benefit of knowledge produced out of this paradigm is that it is orderly and generalizable to a great number of people. This means that the product can be applied to a wider population, thus more people benefit from the knowledge (in theory, at least). One problem with this paradigm is that often the input from those on the margins is…well, considered marginal, and therefore irrelevant to the major findings of a research study. However, the profession of social work is concerned with those on the margins (those who are vulnerable and historically oppressed), so it would seem that this paradigmatic perspective is not very aligned with the values of social work. However, knowledge from this paradigm can be used for social justice causes, such as bringing knowledge to the general population about the experiences of those on the margins, for instance. This could be achieved for LGB people of faith by creating a measurement tool that is designed specifically to examine their experiences. In this way, the experiences of LGB people of faith, who are considered to be in the margins of both the LGB population and of people of faith, can have a voice “at the table” so to speak.
Posted by Megan Gandy-Guedes at 6:34 PM